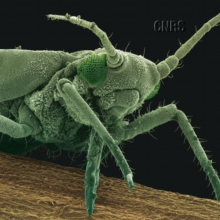 The EPI-Cuticle group-project is a biomimicry-based multidisciplinary project on insect cuticle. It started early 2016 and comprises people from three labs on the LyonTech Campus : IMP UMR5223 (Polymers), LaMCoS UMR5259 (Mechanics) & MAP UMR5240 (Microbiology). We are welcoming other people, maybe materials sciences (Mateis) or from nanosciences (INL), in the near future.
More specifically (see below), we are interested in insect mouth-parts.

You may therefore call us the first insect dentists ever...

EPI stands for Interdisciplinary group-project (french Equipe-Projet Interdisciplinaire), and is meant to gather, in a single environment, researchers from different laboratories and disciplines, willing to work together on a single biological object (in our case the insect cuticle).

Insect cuticle is a biological polymer assemblage/ alloy composed of four biochemical compartments : the first two, chitin and cuticular proteins, are the core-polymeric objects of our projects. Its chitin component is composed of spatially structured and partially crystalline nanofibers of chitin/chitosan domains. Its protein component is constituted of a few to a hundred individual proteins from a handful families, individually binding or not to chitin, and giving the final assemblage many of its specific properties, either mechanical or biological. The third important part of the biomaterial is its biological glu-component, comprising the aromatic-based cross-linking material of the insect cuticle (the so-called sclerotizing component). Finally, lipids and lipid impregnation of the material makes the final assembly part, but will not be considered extensively in our project. Lipids have important consequences in both the water-barrier behavior and the volatile-based chemical ecology of the insect cuticle, but such properties are studied by other groups and projects.

Insect cuticle is one part and example of the exoskeleton solution adopted by evolutionary successful animal classes within the arthropods (insects, crustaceans, arachnids…), and is challenging the endoskeleton-based solution of the vertebrate sub-phylum (based on different types of solid materials, such as bone -for the skeleton-, and dentine or enamel -for the mouth-parts-). 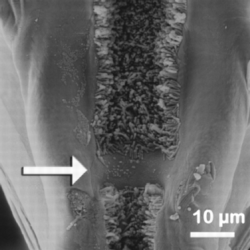 As for any other biological solids, insect cuticle bears different peculiarities and functions that deserve specific scientific attention: their biogenesis (development), their morpho-mechanical properties (biomechanics), and their biological adhesion properties (biocommunication). Being externally exposed, the latter property is especially important for the signalling/barrier properties of the arthropod individual with its environment, including its microbial environment.

As for the vertebrate tooth system, the solid cuticle of insect mouth-parts is often hyper-specialized into both extraordinary bio-materials and exceptional biological objects : the butterfly spiral trumps, the fly pads, the coleopteran jaws or the diverse (evolutionary independent) sucking mouth-parts of many insect orders (mosquitoes, plant bugs, lice, fleas etc…) are just examples of an impressive diversity, all deserving specific evo-devo approaches to understand their respective macro-evolutionary scenarii…

In this context, our biological object model of insect cuticle is that of the hemipteran mouthparts (i.e. plant bug), particularly the four internal parts of the Hemipteran stylet, and more specifically that of the aphid stylet.

If ever you were not convinced that insect cuticle, and its mouthparts avatars, can do extraordinary things, take a look below...